In some situations like this project, we have the opportunity to teach the catechism for kids and during one of those trips, to that remote place, one little girl asked an amazing question to one of the volunteers of the project:

What-if Adam had refused to eat the forbidden fruit?

Adam would not have sinned, but we would have a big theological problem. I believe the answer would be part of the revelation of God but since we are in the realm of what-ifs we can be creative and try to guess one solution.

Genetics would not be a solution here (like this paper I found on the internet regarding HP genetics - "how the wizarding gene could be singular, autosomal, and dominant") since the event happened when Eve was already an adult. It could be a mutation but since it's a spiritual phenomenon I'd think genetics won't help us.

The Catechism (1992) describes the original sin as something that was lost.

"By his sin Adam, as the first man, lost the original holiness and justice he had received from God, not only for himself but for all humans."

So we can use the mechanism of a civil inheritance, in this mechanism the debts of the parents are discounted from the estate and not from the offspring. In our case the debt was charged during the life of Adam and Eve and they lost their properties (the supernatural gifts and the preternatural gifts).

In this framework, we could suppose that one effect of this asymmetrical sin would be that the descendants could still inherit from Adam and then there would be no original sin for the humankind. In other words, this would proof that Adam has the same guilty as Eve in the original fall.

But to complicate things we know that God expelled Adam and Eve from paradise and then in the what-if case we are studying only Eve would be expelled and if she was not pregnant yet we would have no humankind. Wait! Maybe Adam could have another rib to spare! Wait again, you gonna be spanked by being gender biased! Ok, but it's not my fault if I have to work with the description of Genesis.

And to complicate more, Eve could have been expelled from the paradise already pregnant. If she was expecting only one kid we have game over and should consider another rib. But then we have 1.5% probability she was expecting twins (without taking into account that twins were rarer than today), but identical twins obviously would be game over too, as well same gender fraternal twins. The only hope for the propagation of humankind would be mixed gender fraternal twins and that give us with roughly 40% probability over 1.5% or 0.6% of Eve having possibility to get grandchild vs 99.4% of extinction of the humanity. [There's an exception here I didn't dare to write at first but the odds can be increased to 50.3% if you consider that having a male child, twin or not,  would enable Eve to maintain the human race]

Paraphrasing Oscar Wilde, since we are already in the gutter (and maybe in some kind of heresy) why not try to see some stars. Supposing Eve left the paradise pregnant with fraternal mixed gender twins. Would those kids inherit from Adam or not? Considering most of inheritance laws around the world they would, unless Adam died before Eve, but that would hardly happen since Adam had the preternatural gifts.

But Adam ate the fruit of the forbidden tree and we can stop this what-if theological nonsense and chant with the Catholic Church in the Paschal vigil: "O felix culpa quae talem et tantum meruit habere redemptorem" (O happy fault that earned for us so great, so glorious a Redeemer.)

Note: The What-If idea was based in the wonderful site from Randall Munroe. Maybe we can continue this discussion with the refusal of Eve to eat. 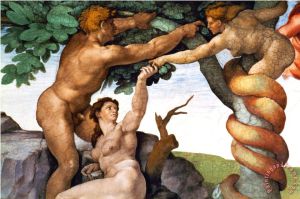